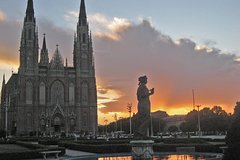 Discover La Plata, Buenos Aires Province's capital during a half day tour full of architecture, culture, religion and natural sciences. Paradigm of modern urban planification, La Plata offers a perfectly square shape.Only 1 hour away from Buenos Aires, La Plata City Tour is a nice way to get to know more about Argentina and see less mainstreams attractions.ItineraryThis is a typical itinerary for this productStop At: La Plata Buenos Aires, Calle 50 & Calle 115, La Plata, Buenos Aires, ArgentinaAfter being picked up in your centrally located hotel in Buenos Aires, drive for 56 km on Avenida La Plata in a comfortable coach equipped with Air Conditioning and Heating. During the trip to La Plata, get a nice view of the same name River, while your multilingual guide explains the history and foundations of the famous square city. Duration: 1 hourStop At: Catedral de la Plata, Calle 14 e/51 y 53, La Plata ArgentinaArriving at destination, visit the important Neo Gothic Cathedral, considered as one of the world's biggest. Inspired from Europe, it was made in 1932. Then, walk along the city's diagonals and be impressed by its perfect geometrical shape.Duration: 30 minutesStop At: Teatro Argentino, Calle 51 e/ 9 y 10, La Plata 1900 ArgentinaVisit the Astronomical Observatory and the Argentinean Theatre, while your guide explains by who and how they were built.Duration: 30 minutesStop At: Museo de La Plata, Paseo Del Bosque s/n, La Plata B1900FWA ArgentinaGet a glimpse at the Natural Science Museum, South America most important science museum. Hosting a collection of over 2 millions objects and specimens, it is as a center of Paleontology, Anthropology, Geology, Botany and Zoology (didactical and educational museum of Argentinean historical species). Get to know better the Argentinian regions and its natural climates (sea,mountain, Patagonia